Dancing with the Lion, both books: Becoming & Rise have been available almost 2 years now. It's available via Amazon in both ebook and paper versions.

If you'd like to read reviews first, you can find quite a few at Goodreads.

I haven't posted here in ages. Real life has eaten me. I'm now both Director of the Ancient Mediterranean Studies Program as well as the Graduate Program Chair at UNO, plus had various family concerns.

But I have two notices that may be of interest. First, Patrick Garvey put together a podcast on several topics surrounding Alexander. I'm one of the interviewees along with Daniel Ogden at Exeter, as well as a Macedonian woman who has some interesting things to say, and Andrew Chugg. They can be found here: http://www.achillesgene.com/podcast

The podcast is one of the more careful, in terms of historiography.

Second, if anyone lives in the Boulder/Denver area, I'll be giving a public talk, "Who's Buried in 'Philip's Tomb'?" at the University of Colorado, Boulder, on October 20th (2016). It's free and open to the public. As some of you ma know, the 40th anniversary of the opening of the tomb is coming up in 2017. There have been some new contributions to discussions of the bones, two articles published in 2016 (Bartsiokas, et al., and Antikas/Antikas-Wynn). They'll be included in my presentation. 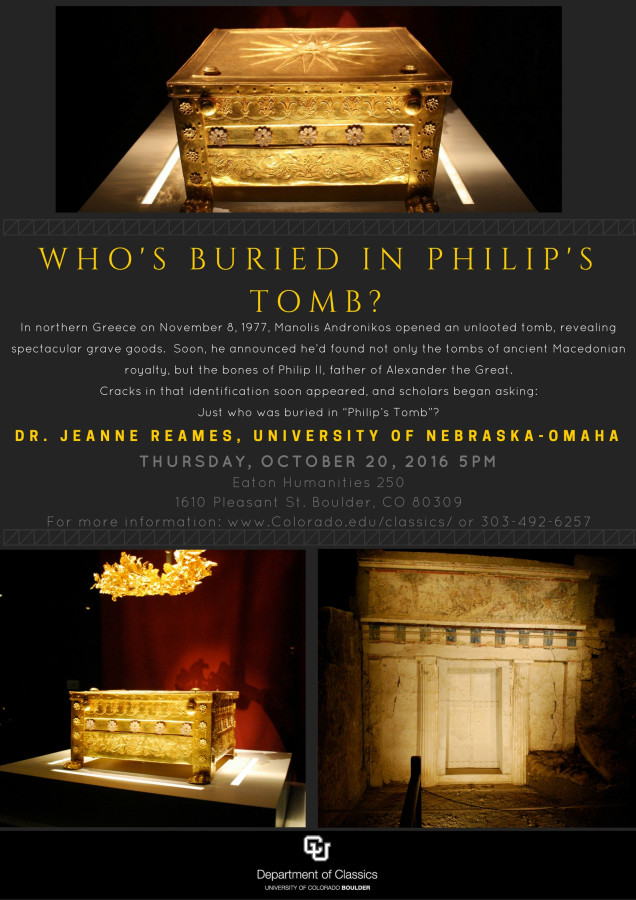 Hi, I hope no one minds me posting this here, but as this community seems to have faded and if you are still interested in Alexander/Hephaestion, you may wish to know that the only community (apart from www.pothos.org)still going strong -'Alexander's Army'- has moved from Yahoo to Livejournal. Do please check it out -

"One institution of the old Macedonian kingdom, kept up the Ptolemies in Egypt, as in other Hellenistic courts of those days, must have given social prestige to a certain number of families - the practice of bringing up a picked number of boys at court in attendance on sovereign and in close association with the boys of the royal family.  They were called paides basilikoi, and in after-life a man who, as a member of this corps, had been the comrade in boyhood of the man now on the throne, might describe himself as the king's syntrophos.  An analogous number of girls seem to have been brought up with the little princesses of the royal house.  Possible the title of tropheus ("nurturer") of the king, which we find borne by certain men at the prolemaic court (as at other Hellenistic courts), means that the person in question had had charge of this corps of boys, together with the direction of the little prince, who was now king."

If anyone is interested, I've started a small community for Greek and Roman art, particularly sculpture - the sort of things that Alexander would have been familiar with.  It's called

Part of the entry on Hephaestion:

‘For it is equally to the credit of Hephaestion and Alexander, that though the former undoubtedly owed his elevation to the personal favour and affection of the king, rather than to any abilities or achievements of his own he never allowed himself to degenerate into the-position of a flatterer or mere favourite, and the intercourse between the two appears to have been uniformly characterised by the frankness and sincerity of a true friendship.’

‘It was fortunate for Hephaestion that his premature death saved him from encountering the troubles and dissensions which followed that of Alexander, and in which he was evidently ill qualified to compete with the sterner and more energetic spirits that surrounded him. Even during the lifetime of the king, the enmity between him and Eumenes, as well as that already adverted to with Craterus, had repeatedly broken out, with a vehemence which required the utmost exertions of Alexander to repress them; and it is but justice to the latter to observe, that his authority was employed on these occasions without any apparent partiality to his favourite. (Plut. Alex. 47, Eum. 2 ; Arr. Anab. vii. 13, 14.) If, indeed, we cannot refuse this obnoxious name to Hephaestion, nor affirm that he was altogether exempt from the weaknesses and faults incident to such a position, it may yet be fairly asserted that history affords few examples of a favourite who abused his advantages so little.’

Mary Renault says something similar in The Nature of Alexander - "that so little is adduced against him is remarkable."  Perhaps she had read this.

This is a little video on Alexander's statue by John Romer from his 1994 television series The Seven Wonders of the Ancient World.  He goes on to say that Alexander's face was used on the Colossus of Rhodes.  He also reckons that Alexander was a bit deaf!

This map of Alexandria comes from E M Forster's Guide to Alexandria (1922).

The island of Pharos was, according to Forster, empty in the early days of Alexandria (possibly until the building of the lighthouse about 279 BC) except for a temple to Hephaestion.  Presumably this temple is the one Cleomenes, the Greek Alexander left in charge of Egypt, built in the hope that Alexander would excuse his corruption charges.  He was executed by Ptolemy in about 322 BC.

It is possible that the temple to Hephaestion might have been the first building that anyone saw on sailing into the new Alexandria. The prehistoric harbour (the island was known to Homer), might still have been in use until the causeway was built, creating the two great harbours, and merchants arriving in the new city might have drawn up their contracts and sworn to uphold them in Hephaestion's temple, as Alexander ordered that merchants' contract were to include Hephaestion's name, and oaths were sworn in Hephaestion's name.

Is this a testimony to Hephaestion's organisational abilities, and perhaps a reputation for fair dealing?

I'll be traveling to Athens for the first time next month, and I know that I'll just be overwhelmed by all the amazing places and things there is to see.

Are there any particular Alexander or Hephaestion artifacts (or sights), big or small, in or around Athens that I should be on the lookout for? I would hate to miss something must-see. Thanks!

I don’t know if anyone will be interested but I’ve written a very long, and doubtless boring, essay on Alexander & Hephaestion’s early years.